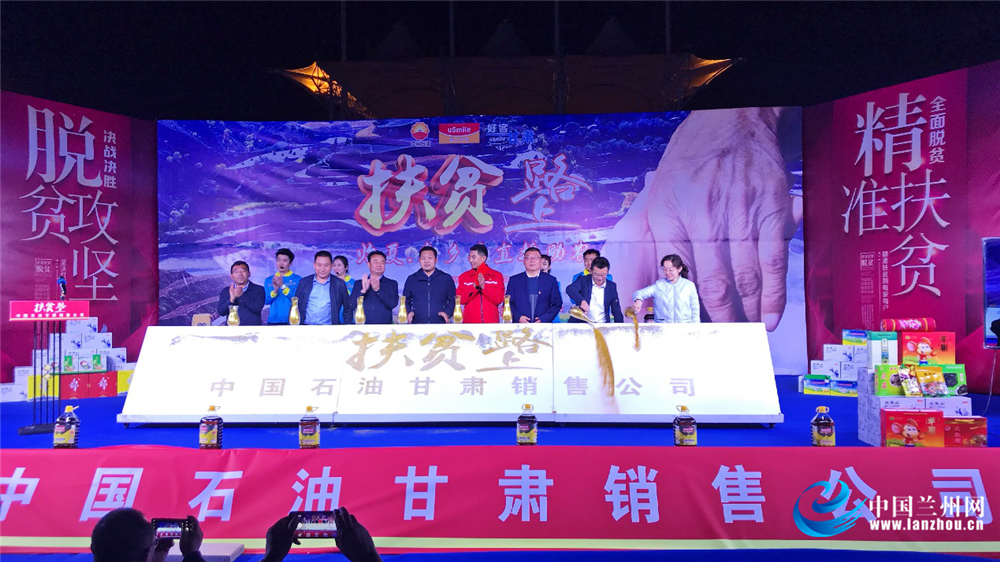 On the evening of September 22, the series of activities entitled "Live Streaming to Help Farmers ・Jointly Fulfill the Dream of A Well-to-do Life" were successfully held by CNPC Gansu Sales Company in Dongxiang, Gansu, ending up with the sales volume of 450,000. Data shows that during the activity period, CNPC Gansu Sales Company helped sell around 4.5 million specialty agriculture products from 8 poor counties and Jishishan County through the "cloud" mode of "e-commerce + live streaming", thus benefiting over 100,000 poor people.

Gansu is one of the most difficult provinces that win the anti-poverty war. Among 86 counties, cities and districts in the whole province, 58 counties are listed into the poor counties of Liupan Mountain, Qinba Mountain and "three districts" of Tibetan area. In addition, it also has 17 poor counties of the flower arrangement type. At the end of February this year, Gansu Province announced that 31 counties were no longer poor counties for they no longer accorded with the national standard of poo counties. Since then, there are still 8 poor counties with 175,000 poor people in Gansu Province.

This year is the last year of comprehensively building a moderately prosperous society and conducting poverty alleviation. Gansu, as the national main battlefield of poverty alleviation, has gathered the power of the whole province and the whole society in the process of fulfilling the solemn commitment of "not leaving one person behind on the way of poverty alleviation" and conducting the anti-poverty battle. CNPC Gansu Sales Company is one of them. By reviewing the anti-poverty history of Gansu Province, CNPC Gansu Sales Company has made great contributions. Villagers from Shenjiaping Village, Jishishan County all give thumbs-up to CNPC.

"We live on the land. Our father is sick all year round, so we have to support our family through part-time jobs. We felt both happy and worried when recruited to the college. " Zhang Shunxiu and Zhang Sunping, who are from Shenjiaping Village, Jishishan County, Gansu Province, graduated from the college last year and this year respectively. Mentioning their college life, the two were still grateful for the company's subsidies. "The two-thousand-yuan subsidy per person per year means a lot to us." At present, Zhang Shunxiu has started working and their living conditions are thus getting better and better.

The reporter got the news that CNPC Gansu Sales Company has always assumed the duties of the central enterprise on the way of poverty alleviation. It has assigned multiple cadres to the village, who have helped villagers construct the man-beast drinking project, village roads, village cultural square, garbage pond, and provide oil for farm cultivators, construct the dangerous building, conduct the indoor lighting project, donate anti-disaster oil, clear the riverway, and support the poor and the ambitious. The cadres have left their anti-poverty stories in various districts, cities and counties in Gansu Province.

At present, "selling goods by live streaming" has become a "fashion". All walks of life have consecutively emerged and come "on the cloud".  CNPC Gansu Sales Company keeps up with the "trend". In this March, it set up "Live Streaming Room of Hospitable Gansu", and created the live streamer team to advocate the "petroleum spirit". Meanwhile, by responding to Gansu's appeal of living a well-to-do life, it regarded "Live Streaming Room of Hospitable Gansu" as the platform, innovated the consumption anti-poverty mode of "e-commerce + live streaming", and put the specialty agriculture products from the poor counties to "cloud", thus solving the difficulty of product market in the poor regions.

"We used to watch others "sell goods" online, but now our products are also put "online" and they are very popular. So we are really happy and relieved. " When the activity was held in Tongwei County, Gansu Province, Niu Suixiang, the villager from Longchuan Town in the county, told the reporter, by looking at the products that were being seckilled in the live streamining room, that it was great to sell goods in this way, saving both wrroies and effort.

CNPC Gansu Sales Company said that the purpose of holding activities entitled "Live Streaming to Help Farmers ・Jointly Fulfill the Dream of A Well-to-do Life" was to put the high-quality specialty agriculture products from some poor counties in Gansu Province to the cellphone screen and present them to national consumers by the internet, and directly sell the specialty agriculture products to urban consumers, so as to help sell the anti-poverty products, and inspire the poor to strive for a relatively comfortable life.

At present, the series of activities have been over. However, what lies behind the sales performance of 4.5 million is the market expansion of specialty agriculture products in 8 poor counties, and the confidence of over 100,000 poor people to make for a well-to-do life.